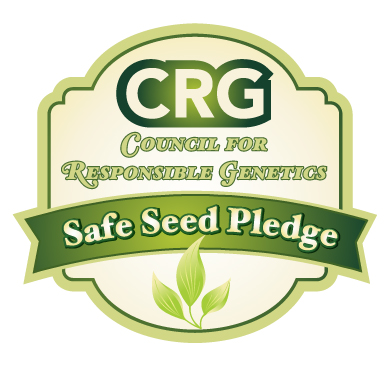 The CRG Safe Seed Pledge is an expression of the scientific belief that gene manipulation of food supplies is essentially immoral.

CRG stands for the “Council for Responsible Genetics.”

For several years, when you go to the CRG Safe Seed Pledge website, what’s there now is a sales page for Microsoft Internet Information Services software.

Make of that what you will.

Nevertheless, the CRG statement itself remains an effective declaration within the context of heirloom and open-pollinated seed production. 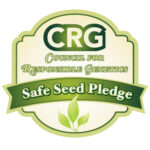 “Agriculture and seeds provide the basis upon which our lives depend. We must protect this foundation as a safe and genetically stable source for future generations.

For the benefit of all farmers, gardeners and consumers who want an alternative, we pledge that we do not knowingly buy or sell genetically engineered seeds or plants.

“The mechanical transfer of genetic material outside of natural reproductive methods and between genera, families or kingdoms, poses great biological risks as well as economic, political, and cultural threats. We feel that genetically engineered varieties have been insufficiently tested prior to public release.

“More research and testing is necessary to further assess the potential risks of genetically engineered seeds. Further, we wish to support agricultural progress that leads to healthier soils, to genetically diverse agricultural ecosystems, and ultimately to healthy people and communities.”

While we, of course don’t think the Pledge is insignificant, we feel the bigger threat here is armies of lobbyists and lawyers owned by very few huge conglomerates like Monsanto.

However, the big agricultural concerns, food industries and even pharma have taken some beatings in the pocketbooks, as lost revenue to the heirloom seed trade.

WARNING: Their response to these losses is to buy heirloom seed companies. Some of them are closed to thin out the competition.

However, most are simply left as they are, to function normally, except now as a new revenue stream for the conglomerate.

You might think you’re boycotting GMO, but buying from an heirloom company whose profits go to fund GMO and lobbyists for big industrial combines.

Lovely how these things go. Pretty smart, in fact. And smart is what you’re up against. So be smart, yourself. This business ain’t always as simple as it looks.

Planting open-pollinated seeds is a modern act of resistance. Plant those seeds and change your life.